The Franco Olympic Games: an analysis of the unsuccessful Barcelona 1972 bid (2013)

The sport historian Juan Antonio Simon, disclosed an aspect which has unfortunately been forgotten by historians of sport: the murky process of choosing the Spanish Olympic bid for the summer Olympic Games in 1972, which concluded, surprisingly, with the Spanish Olympic Committee decision to nominate Madrid versus the Barcelona Olympic project. 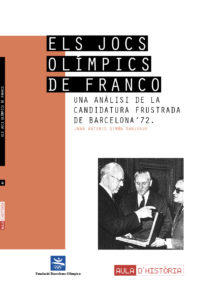 This work, result of his research during his postdoctoral stage at CEO-UAB, was presented in the first session of the academic course 2012/13 of the Hall of History held on Thursday 21 November 2013 at the Olympic and Sport Museum Joan Antoni Samaranch in Barcelona and was published as a book as part of the Aula d’historia series.

In October 1965 the Spanish Olympic Committee (COE) managed to convince the International Olympic Committee (IOC) to hold its annual meeting in Madrid. The “developing” Spain congratulated for the successful propaganda and, meanwhile, sports officials headed by Jos Antonio Elola-Olaso, Delegate of Physical Education and Sports, took advantage of the presence of the IOC President, Avery Brundage, to probe the real possibilities for a Spanish Olympic bid. The positive response from the IOC President automatically awakened dreams of greatness within a specific Franco sector, which understood the staging of this sporting event as the perfect opportunity to radically transform the devalued image of the country abroad.

The challenge was immediately accepted by Barcelona. The Olympic and sporting tradition of the city was unquestionable, deeply integrated into the social fabric of the city since the first third of the XXth century. At the same time, the organization of the Mediterranean Games in 1955 and Barcelona Sports Games since 1962 kept the city?s Olympic project alive during the Franco regime. A month after the IOC meeting, after preliminary talks between Jos Antonio Elola-Olaso and the Mayor of Barcelona, Josep Maria de Porcioles, Barcelona decided to submit its Olympic bid to COE to compete for hosting the 1972 Summer Olympic Games.

Unexpectedly, on 16 December 1965, less than two weeks before the closure of the deadline for submitting bids to the IOC, Madrid also decided to submit his own Olympic project. The strict control of media resulted in an absolute vacuum of information, a “blackout” that concluded on 28 December with the publication of a brief news piece by the agency Alfil reporting on COE decision to choose the Madrid bid. Subsequent complaints and resignations from the COE Catalan members have shed the COE decision to hold on Christmas Eve, 24 December, the meeting to choose the candidate city. It was known that three Catalan members, Count of Godo, Marquis of Cabanes and Juan Antonio Samaranch would not attend the meeting as they were in Australia accompanying the Spanish tennis team in the Davis Cup. The other 2 members, Victorian Oliveras de la Riva and Pau Negre Villavecchia, were notified two days in advance and not informed of the agenda. Both did not travel to Madrid as they couldn’t travel by plane or train and could only do on it on their private cars during the festive day.

During the presentation, Juan Antonio Simon has deepened on the role of sport during the Franco regime, and answered to some key questions regarding this historical moment: What elements defined Barcelona’72 Olympic project? What prompted the unexpected decision by the Spanish Olympic Committee? What were the consequences of that decision on Catalan members? What was the role of Franco government in this process? What interest had Madrid to host the Olympic Games in 1972?