Symposium on the management of social networks and sport (2015)

Academics from the University of Southern California, the Sorbonne Nouvelle-Paris III and the Autonomous University of Barcelona (UAB), along with representatives of sports organizations such as the International Olympic Committee (IOC) and ACB.com, recently gathered to analyze the phenomenon of social networks in the world of sports. The International Symposium on The Management of Social Networks in Sport: Organizations, Athletes and Brands was held on 11th and 12th November at UAB’s Faculty of Communication Sciences, and led by its Centre for Olympic Studies. 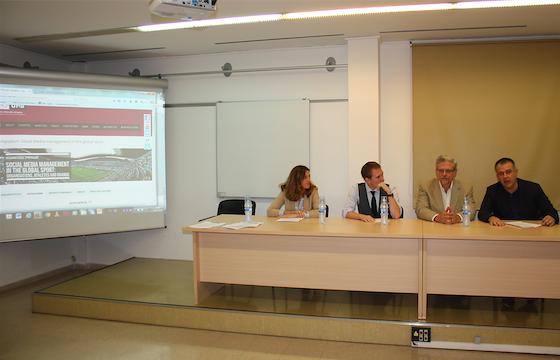 Presentation
The International Symposium analyzed the relationship between the public and the main actors within the sporting world with specific regard to social networks, and considered how recent changes are reorientating the business and communication models of sports organizations and global brands alike. The Director of UAB’s Centre for Olympic Studies, Emilio Fernández Peña, opened the event by speaking of the challenges present within this new area of research. Following on from this point, Matilde Delgado, director of the Department of Audiovisual Communication and Advertising within UAB’s Faculty of Communication Sciences, underlined the powerful role of sport in our society and its synergy with social networks.

The power of images in social networks
Professor Emilio Fernández Peña provided an overview of the evolution of online communication and defining two concepts considered key to understanding social networks: cross-pollination and engagement. He highlighted the role of sport among Facebook pages and Twitter accounts with the highest numbers of fans. Fernández Peña continued by emphasizing the importance of images in social networks, using the example of the 2014 Games in Sochi, whereby photography dominated the Facebook content.

The International Olympic Committee and the ACB on social networks
The initial session continued with a presentation from Head of Social Media for the International Olympic Committee (IOC), Alex Huot, who spoke of the social media strategies developed for the world’s biggest sporting event, the Olympics. Huot outlined the main hashtags created by the IOC, the content used to attract the attention of users, and provided some figures on participation which revealed the major interests of users during the Olympics.

Head of content for ACB.com, Paul Malo, explained how social networks have led to a change in strategy towards a bi-directional digital medium, enabling a convergence of communication between teams, players, leagues and fans.

During the second part of the day, Courtney Cox, a PhD student from the University of Southern California, presented her paper on the evolving forms of communication of NBA players on Twitter. Cox highlighted that players’ personal accounts have enabled them to become in charge of handling their own media. Dr Daniel Durbin of the University of Southern California expanded on the issue by considering new forms of communication and the rhetoric between the world of sport and social networks.

The construction of the brand in the sports world
Day two of the Symposium began with a session dedicated to brand-building among sporting organizations and athletes. The doctoral candidate from the Sorbonne University of Paris III, Yann Descamps, focused his presentation on the building of global brand identity through sport, using the case study of Paris Saint-Germain football team in highlighting its commitment to social networks and to the digital world more broadly, as a means to building the team’s brand.

Expert in social media and sport, Jana Garcia, spoke of the brand-building of elite athletes via social networks. She outlined the various good practices which must be undertaken if successful networking is to continue in professional sport, and highlighted the various risks involved in crises of reputation and image.

The Symposium continued with a presentation from Professor Michael Park of the University of Syracuse in New York. Professor Park, who specializes in sports law, spoke of the legal and moral consequences of restricting the use of social networks at universities, adding that in the United States, 94% of student-athletes have Facebook and devote at least an hour a day to social networking.

Òscar Coromina, specialist in social networking and web analytics and Assistant Professor of UAB’s Faculty of Communication Sciences, presented an academic paper on engagement via Facebook during the London 2012 Games. He revealed that over 800,000 users were involved, and that the content which attracted the greatest amount of attention did not tend to focus on the Olympic values but instead focused on the ‘spectacle’ element of the Games.

The Symposium concluded with a presentation dedicated to the topic of sports analysis, delivered by Jesús de Pablos, Co-Director of 1d3a. De Pablos presented the video analysis tool used in the professional field of talent identification. In recalling the importance of subjective analysis in sport, he stressed the need to find alternative forms of communication in order to create new systems aimed at improving analysis in competitive sport.

The International Symposium on The Management of Social Networks in Sport: Organizations, Athletes and Brands was co-organized by CEO-UAB, the University of Southern California and the Sorbonne Nouvelle Paris III University, with support from UAB Faculty of Communication Sciences and the UAB Department of Audiovisual Communication and Advertising.