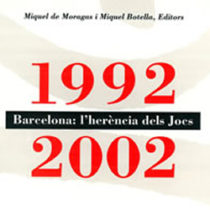 The book Barcelona: lherència dels Jocs (1992-2002) offers a collection of studies and accounts of the Barcelona92 Olympic Games written on the 10th anniversary of the event and therefore offering a new longer-term perspective on that memorable event.

This book is an update of the earlier book by the same editors, The Keys to Success published in 1995, which offered a collection of different studies on the social, sporting, economic and cultural impact of Barcelona92, written immediately after the Olympic Games.

The new book follows the same format as The Keys to Success in terms of analysing various aspects of the legacy of the Olympic Games, but on this occasion highlighting the medium and long-term impact of that event.

By way of an introduction to the book, there is a transcription of the conversation held in June 2002 between the people who played a leading role in the Olympic Games preparation and organisation: Joan Antoni Samaranch, Pasqual Maragall and Josep Miquel Abad, who reveal some of the key issues relating to the historical interpretation of the Barcelona Olympic Games and assess their impact.

The first part of the book focuses on the analysis of the Barcelona92 model. It begins with a transcription of an interview with Josep Miquel Abad, Chief Executive Officer of COOB92, and articles by Miquel Botella and Gilbert Felli referring to the organisational model and the evolution since Barcelona92 of the Olympic system and relations between organising committees and the IOC.

The article by Joan Botella analyses political aspects of the organisation, relationships between political stakeholders and international influence, and the article by Enric Truñó analyses the prestige gained as a result of the Barcelona model way of doing things.

Miquel de Moragas analyses intangible aspects of this impact, which he terms the legacy of symbols, and different ways of interpreting and recalling the meanings of Barcelona92 on a global scale.

Andreu Clapés analyses the volunteer movement, which made a decisive contribution to the success of the Olympic Games, and the subsequent evolution of this movement in Barcelona.

The second part of the book considers the legacy of the Olympic Games, with articles by Ramon Pallejà, Xavier Segura, Àndor Serra and Martí Niubò on the use of sports facilities after the Olympic Games and the sporting habits of the people of Barcelona. Albert Batlle and Albert Soler refer to Barcelona City Councils Strategic Sport Plan, finalised in 2002, which actually suggests strengthening the sporting experience capital left by the 1992 Olympic Games. And, finally, Josep Escoda gives an account of the impact of the Olympic Games on high performance competition and how it has evolved over a 10-year period. The third part of the book considers the social and economic impact. This part of the book begins with an article by Pere Duran on the tourism impact on the city of Barcelona. It is should be noted that the book The Keys to Success published at the beginning of 1995 did not refer to this theme, the reason being that tourism impact needs to analysed from a longer time perspective. The results of the new analysis showed that the impact of the 1992 Olympic experience was beneficial to tourism too.

Some of the authors that had already written chapters for The Keys to Success review their studies in depth and introduce a new evolutive view of the economic, urban planning and social impacts. These chapters are by Ferran Brunet, who analyses the economic impact and provides new information on the extensive projection of the Barcelona Olympic Games, by Lluís Millet, who writes about the urban model from the perspective of the city’s subsequent development, and by Jordi Carbonell, who refers to the transformation of the Olympic Village into a new neighbourhood of the city, with its Olympic function very distant in time.

An article by Jordi López and Ferran Pastor analyses the evolution of information and communication technologies. The authors remind readers of the fact that the Barcelona Olympic Games were the last Games without the Internet; in spite of that, they assert that information management was very effective and successful.

Finally, there is a chapter by Miquel Botella, who analyses the final legacy of the Olympic Games. Here he is referring to the ideas that led to the planning and organisation of the Universal Forum of Cultures 2004. Although it was an event of a very different kind and with very different content, the experience and memory of the 1992 Olympic Games were very much present in the way it was managed.

The book ends with a documentary reference prepared by Berta Cerezuela, a Documentalist at the CEO-UAB, which offers a summary of the bibliographical works on the Barcelona’s 92 phenomenon. This highlights the large number of works produced for what could be called the Academic Olympiad.