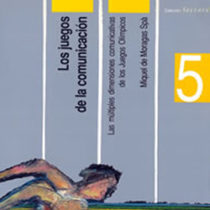 “The universal and cyclical phenomenon of the Olympic Games has, since they first began, gone far beyond the elementary dimension of a sporting event. At the end of this millennium, it would be hard to talk about Olympiads without referring to their cultural and communication dimensions. Universality, the overriding attribute of the Olympic Games, is now full of content of a globalising, worldwide nature, brought to it by the media which, at the same time, benefit from information and communication technologies.

In the preparation and staging of Olympic Games nowadays, we can find the maximum expression of all registers and levels of modern communication. The Olympic Movement greatly depends on the media but, at the same time, it offers the media the chance to try out and test their wealth of transformation capabilities.

This multi-faceted, suggestive book deals with this spectacular symbiosis. It describes, with elegant precision, the many and complex ties that connect the Olympic Games with communication and culture, with the backdrop of technology.

The book is, of course, about a huge focal point of interest: the Olympic Games. However, beyond this unquestionably attractive event, the book includes an important reflection on the consequences and benefits of organising and hosting the Olympic Games, which turn the host community not only into the centre of attention for global television, but also into a communication laboratory of incredible dimensions in terms of internationalisation, marketing, semanticisation of values, the use of new techniques, political impact, etc.

The authors analysis is diverse and extensive. From relationships between communication, culture and the Olympic games to the role of telecommunications and information technology at Barcelona’92. In between we also find economic and budgetary issues, services, political meaning, funding, symbology, sponsorship, the meaning of Olympic rituals and the detailed role that the media play in the Olympic Games.

This is, without doubt, one of the foremost books on communication. Written in an amenable yet rigorous style, it is of genuine interest to a broad range of readers, though it is, of course, essential reading for researchers and stakeholders involved in every aspect of communication.”