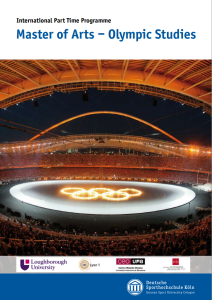 The programme has been developed by a core network of universities, including the German Sport University Cologne, University of Mainz, Loughborough University, Autonomous University of Barcelona and University of Lyon. The IOC Olympic Studies Centre has contributed to the development of the academic project.

CEO-UAB is responsible for the teaching module on Olympic Games, media and commercialisation, coordinated by Dr. Emilio Fernández Peña, Director of CEO-UAB. Through the sessions, students learn on the extent to which this presents challenges to traditional IOC policies and Olympic values, by developing an understanding of the influence of media and commercialisation on the Olympic Movement and a critical understanding the commercial and media strategies of the IOC, OCOGs and TOP sponsors. Students also gain knowledge on the impact of new media on the relationship between the Olympic movement, media, and consumers.

The main objectives of the study programme are to:

The M.A. is a part-time programme spread over two years with 4 terms of study. It consists of six taught modules and the submission of a thesis. The modules are organized on a weekly schedule (6 working days per module). Per term, two single weeks of on-campus studies are compulsory. The following modules are taught in the programme:

CEO-UAB offers a support programme for PhD students undertaking postgraduate studies at the UAB in the field of Olympic studies and sport, in particular in …