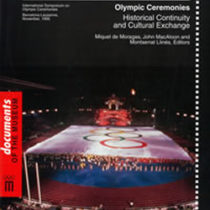 The book contains a selection of debates and a compilation of papers presented at the 1st Symposium of the International Chair in Olympism (IOC-UAB) on Olympic Ceremonies, held in 1995 at the Olympic Museum Lausanne. Over five days, almost 70 specialists explored the significance of Olympic ceremonies for the Olympic Movement and their role as a prime context for studying international relations and cultural diversity.

Like the symposium, the book is divided into four interrelated thematic areas. First, the contemporary functions and structures of the ceremonies were documented and interpreted from theoretical communication and cultural sciences angles. The ritual symbols  lighting of the Olympic flame, the parade of nations, oaths, media groups, medals and flag-raising  are analysed from the point of view of being components of a general ceremonial system and from their relationship with Olympic ideology.

Second, the specific experiences of previous Olympic Games  Albertville, Barcelona and Lillehammer  are analysed in detail by those in charge of their organisation and production, and by social sciences observers and media analysts. The triangulation of expertise and focus is clearly beneficial to the generation of knowledge on regulatory problems (Olympic Charter, IOC-OCOG rights), the selection of designers and scriptwriters, cultural management and the communication of meaning in the global context of the Olympic Games.

As these papers clearly show, the contributions made by those in charge of organising and producing ceremonies, by stakeholders and by direct witnesses add information that is crucial to the anthropological and historical interpretations developed by social sciences fieldwork. At the same time, the comparative and historical knowledge of social scientists  with experience of undertaking research into different editions of the Olympic Games  helps senior professionals to position their actions in a wider context and future producers to take decisions that are more informed.

The third body of knowledge included in this book is an account of the historical evolution of Olympic ceremonies, from the very first Olympic Games of the modern era held in Athens to the most recent Games  at the time the book was published  held in Lillehammer. Historians of the Olympic narrative were very attracted to the ceremonies theme of the symposium, partly because photographic evidence allows written records to be complemented. These papers symbolically document the first Olympic rituals and symbols, as well as their subsequent permutations and re-permutations, thus showing how the current system gradually developed.

In the fourth section, producers and organisers hint at the thematic and organisational direction of upcoming – at the time the book was published – ceremonies for Atlanta96, Nagano98 and Sydney 2000. This sections ends with the conclusions and final recommendation of the symposium.