Social networking and the Olympic Movement

In 2010, CEO-UAB initiated a new research line on social networks and the Olympic Movement with a research project, “Social networking and the Olympic Movement: Social Media Analysis, opportunities and Trends”, funded by the International Olympic Committee. It was developed at CEO-UAB under the direction of Dr. Emilio Fernández Peña. Research team members included Mari Arauz, Angelica Sha and Sandro Garcia.

This study comprises an approach to, an analysis of and future recommendations for the IOC’s strategy on social networking and on social media in general. It offers a comprehensive analysis of social media strategies at Vancouver 2010 Winter Olympics and Singapore 2010 Youth Olympic Games by the main actors of the Olympic family together with a great quantity of social networking sociodemographic data and tools for monitoring Facebook and Twitter. At the same time, different case studies about social media strategy by Olympic Athletes, NBA, FC Barcelona, Coca Cola and Starbucks, FIBA and the rest of Sport Federations are presented. The research closes with an in-depth study of new communication trends in social media.

Research findings represent a diagnosis of the IOC’s current strategy, not in isolation, but in relation to its main partners and stakeholders. The recommendations emerging from the CEO-UAB study aim to maintain a balance between what, from our perspective, the IOC’s social networking strategy is and what it should be. It is a reflection and a conscious analysis of the pros and cons of certain decisions, and it attempts to provide external input that contributes to making the task of disseminating Olympism more effective, a task that falls to its parent institution: the International Olympic Committee. 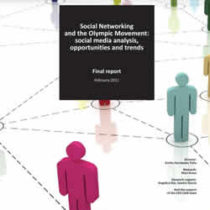 Report of the research project on social media and the Olympics, funded by the International Olympic Committee, and developed at CEO-UAB in 2010. Among the …