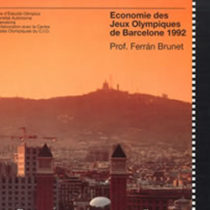 Economy of the 1992 Barcelona Olympic Games

Resulting from a university research project, this book provides an analysis of three themes relating to economic aspects of the Barcelona Olympic Games: the economic model used to stage them, the resources used on public works and the organisation of private investment, and the economic impact of the Olympic Games.

The first part of this book focuses on the inter-institutional stakeholder model of the Barcelona92 Olympic Summer Games, on the separation of organisational and investment tasks, and on management based on a mixed-economy regime. The city gave the world an Olympic Games that wholly matched up to the Olympic spirit. It was full of record-breaking sports and great athletes, and the audience was bigger. The second part examines, in detail, the resources used directly on the preparation of the Olympic Games, their use for investment and consumption, and their funding. Broadcast rights and sponsorship experienced significant growth at Barcelona92.

In the last section of this research project, many aspects of the economic impact of the Barcelona’92 Olympic Games are assessed: direct expenses and induced demand, employment created, collective capital created, highway infrastructures, new neighbourhoods, telecommunications, cultural and sports facilities, a better position in the ranking of European cities, etc. The major urban transformation that Barcelona wanted to bring about by hosting the 1992 Olympic Games greater than ever expected. The city showed that it was very capable of organising an event like this one and of generating investment.

The book was published in Spanish, English and French.