Barcelona al món: the role of sport in the international projection of the city

CEO-UAB collaborates with the working group Barcelona al Món, created at the Municipal Sports Council of Barcelona in 2016 with the aim of reflecting on the role of sport as a driver for the international projection of the city of Barcelona.

The collaboration started with the participation as expert of its director, Emilio Fernández Peña, joined by its general coordinator, iquel Gómez Benosa, in 2017. As part of the process, the experts participated in the four working sessions held on April 26, May 18, June 20 and July 6, 2017. In addition, in 2017, CEO-UAB was commissioned to support the working group by drawing up the initial diagnosis and the synthesis of the results of the group’s reflection throughout the entire process, shaped as a strategic proposal. This work, undertaken by CEO-UAB project manager, Berta Cerezuela, was carried out from January to July 2017. 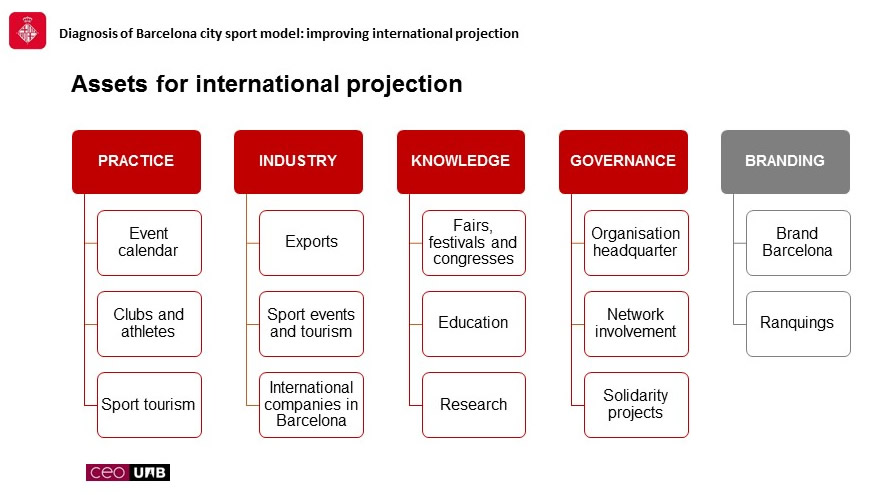 These assets are grouped into four areas – sports practice, industry, knowledge and governance – plus a fifth transversal asset, branding. The result reflects the polyhedral vision of the sports sector that characterizes the city with assets that can provide long term value to the city in terms of innovation, job opportunities, creativity and decision taking influence, among others.

Included a selection of 10 cities to be analysed and the indicators to collect. A pilot report on 4 cities (Copenhagen, Glasgow, Berlin, Amsterdam-Rotterdam) was also produced.

Storytelling of the reflection process on the role of sport in the international projection of the city.

The document includes the synthesis of the results of the reflection of the working group throughout the entire process and its articulation into a strategic proposal. The proposal, which aims to consolidate Barcelona as an international capital of sport through a new model, is structured in four strategic areas and a series of management tools to facilitate its implementation.

In addition, the diagnosis was presented at the annual assembly of the Barcelona Sport program that took place on November 9 at the Real Club de Polo in Barcelona.

Head of Projects and the Documentation Service